Female munitions workers are pushed along on a trolley loaded with cases of explosive material by their colleagues out to the railway siding of their factory during the First World War / © IWM (Q 54658)
The massive, government owned production facilities created during the war to make arms, presented an opportunity to create jobs and housing once the war was over. 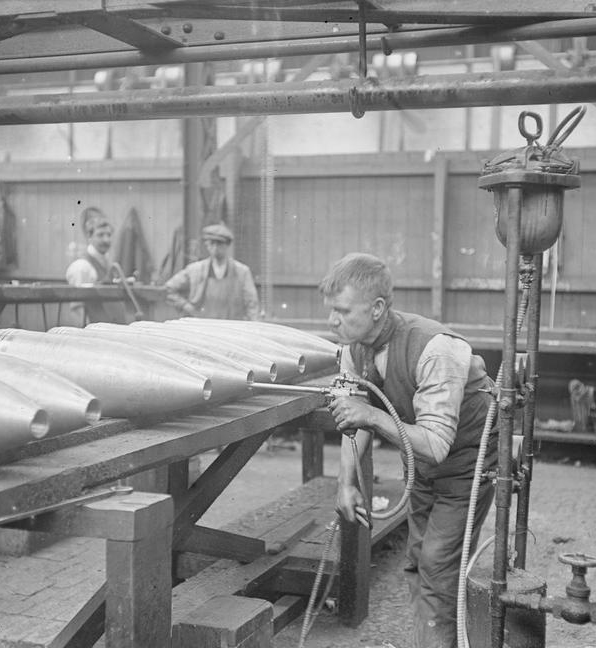 In December 1919, Mr WF Lidbury, secretary of the Mancott Royal Tenants Association, wrote an open letter to the Prime Minister, David Lloyd George, about Her Majesty’s Explosives Factory at Queensferry in North Wales. 1 Not only had the factory fallen into disuse and the vast majority of the workforce been laid off, but the houses and hostels built specifically to accommodate the workers were now standing empty. Why, he asked, given the country’s housing crisis, was the Ministry of Munitions refusing to rent out these properties? Surely, he argued, the factory could be used for peacetime production? He suggested several possibilities for this, including the manufacture of agricultural machinery, which would provide employment opportunities and boost the local economy.

Queensferry explosives factory was established on the site of a disused boiler works. Initially, in 1914, it was acquired by the government for use as a prisoner of war camp but it was soon developed into a huge munitions production plant, occupying 298 acres, including some former agricultural land between the Chester to Holyhead railway and the River Dee. Nitrocellulose, tetryl and TNT were manufactured here. The work was dangerous and there were many accidents. Consequently, the site had its own hospital and between 1916 and 1917, it treated 19,000 people. In addition to the production units, three eight-mile pipe lines were constructed – two to dispose of waste into the Mersey and another to deliver four million gallons of water a day to one of the production units. Dozens of stanchions were erected to support the cables carrying electricity to the site.

Female munitions workers put the finishing touches to high explosive and gas shells in a British factory during the First World War. / © IWM (Q 54593)
During its maximum production period there were seven thousand employees, three thousand of whom were women. Six hundred workers were police, welfare and medical staff.

During its maximum production period there were seven thousand employees, three thousand of whom were women. Six hundred workers were police, welfare and medical staff. In order to transport workers to the plant, 24 hours a day and seven days a week, special railway facilities were developed including a station at the factory gates. In addition, there was a fleet of 16 motorised buses transporting workers back and forth from local towns. The accommodation referred to by Mr Lidbury included Mancott Royal, a garden village of 160 houses for families, and six hostels for lone workers. Three of the hostels, it was reported, were occupied by shift chemists, mainly from Australia. 1

So what became of Mr Lidbury’s plea to Lloyd George to do something constructive with this massive investment? Was the site to become a national industrial asset providing a good living for the local populace or was it to be a wasteful white elephant? Well, it would appear that after the war the government kept some of the site as a Stores Depot for locomotives. This was put up for sale in 1931 but, by 1939, it had again fallen into disuse when it was acquired once again by the government. By the mid-1950s only a small stores depot remained on the site.

Read about an attempt at Woolwich Arsenal to ensure alternative work was provided for armaments workers after the war here.