The cruiser 'Yoshino' at the Elswick shipyard in 1892. / Tyne and Wear Archives and Museums
In 1921, a League of Nations Commission on the private manufacture of arms concluded that before the First World War arms firms fermented war scares in order to sell more arms. In addition, arms firms organised international armament rings to keep prices high by playing countries off against each other. So, were the arms companies competing or cooperating with each other, and what did this mean for the war?

In the run up to the war many armaments firms merged and the market became dominated by a few large companies. Britain’s firms were only surpassed in size by Krupp, the mammoth German firm. The major arms companies in Britain before the war were Vickers Sons & Maxim Ltd, Armstrong and Whitworth, and Coventry Ordnance Works. Other companies included Scottish shipbuilders John Brown, and William Beardmore and Company. Armstrong was founded in Elswick, Tyneside in 1847, and received its first contract with the War Office in 1854 for submarine mines.1 Vickers began dealing in armaments in 1888, yet by 1914 almost equalled Armstrong in size.2

The quarter century before the First World War was ‘a classical period of expansion for the private armament industry’.3 The 1889 Naval Defence Act ‘sparked an immense bout of warlike expenditure on the part of the continental powers.’ This sequence of events highlights the ‘unusual market-expanding effect by which production in the armament sector merely calls forth more production,’ embodied in the German Navy Acts of 1898 and 1900.4 The armaments race from 1910 onwards also increased profits for private arms firms. In the summer of 1914, the interest paid on armament shares grew, and with the coming of war, a number of prominent bankers, and many people associated with the government, increased their holdings. Sir Basil Zaharoff, who sold arms for Vickers, was one of the wealthiest men in Europe after the war5.

In 1905, Vickers’ rivals in armour manufacture, John Brown and Charles Cammell joined with Laird and Fairfield shipbuilders to set up the Coventry Ordnance Works.5

In 1907, in an attempt by Vickers to protect themselves from competition in the post-Boer war market, they bought Beardmore’s, who rendered all their artillery tenders to Vickers in exchange for technical guidance from Sheffield. As a result, Beardmores was no longer a rival, instead they served as a ‘valuable defensive screen for the larger firm’ and a ‘means of curtailing Armstrong’s activities.’6

Until the late 1890s, Armstrong was ‘the outstanding British armaments firm’ whose only main rival was the German firm Krupp. However, by 1896, Vickers had become the ‘only firm in the world able to build a battleship, supply armour plate, engines, guns and mountings and send the vessel out to sea complete’. Vickers had the ‘immeasurable advantage in the 25 years up to the First World War’ of being the ‘new company’ in armaments.1 The pre-war mergers helped Vickers to challenge Armstrong’s unique position.2

By 1905, in terms of capital, Vickers ranked sixth amongst British companies with £7.4 million.3

Between 1900 and 1910, Vickers received over £1 million worth of contracts for ordnance.4

By 1905, in terms of capital, Armstrong ranked eleventh amongst British companies with £5.3 million.5

Arms firms before the war cooperated together within an armament ring, which was a combination of armourers drawn up in order to best profit from the contracts to supply the War Office and Admiralty. David G. Anderson in British Rearmament and the ‘Merchants of Death’, The 1935-36 Royal Commission on the Manufacture of Trade in Armaments, (1994) p13 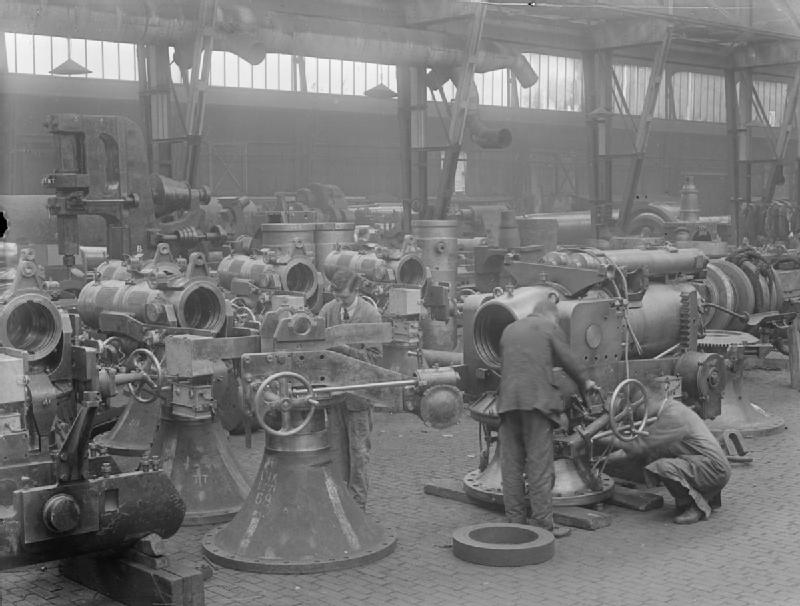 Arms firms often had national names and special connections but tended to organise themselves into international rings and link with other closely related industries, such as chemical or explosive production. In 1901 Vickers joined the large international armament trust, the Harvey United Steel Company (1901- 1913,) comprised of the chief armament firms in Britain, Germany, France, Italy, and the US.1

Vickers and Armstrong ‘pooled designs and parcelled out the leading export markets’. Many arms and shipbuilding firms were interlocked in ownership and shared directors. The Admiralty’s design and procurement branches, for instance, exchanged personnel with arms firms at the most senior level.2

By 1914, Vickers and Armstrong were working together to win contracts in the naval trade, with Vickers securing the lion’s share.

Vickers and Armstrong collaborated on design in the early 1900s, most notably with Canadian orders for twelve batteries of new field guns worth £200,000.3 This was due to an agreement in 1902 between Vickers and Armstrong to freely exchange their designs for British work, therefore abdicating their royalty rights, which was the first step in the process of wide-ranging cooperation. By 1914, Vickers and Armstrong were working together to win contracts in the naval trade, with Vickers securing the lion’s share.4 In 1915, with financial assistance from the Admiralty, Vickers and Armstrong established a new torpedo factory near Lancaster.5

A British group consisting of Vickers, Armstrong, and John Browns was developed by Vickers in 1908. They dealt mainly in Spain and Turkey, with Armstrong providing the hulls, Brown providing armour, and Vickers ordnance, mountings, and engines.11

Both the Admiralty and War Office encouraged the establishment of Coventry Ordnance Works as they hoped the new company would put a check on the dominance of the two largest firms. In response, Vickers and Armstrong campaigned jointly to exclude Coventry. It was reported that they cut rates in order to ‘stifle the development of competition for gun work which Coventry took up for the first time in connection with the rearmament of the field artillery’. Coventry Ordnance Works, however, still managed to obtain a valuable chunk of the artillery rearmament programme.1

The War Office gave most of their contracts to the state owned Royal Ordnance Factories rather than the private firms, although the Admiralty both spent more on equipment and placed a greater number of orders with private industries. Between 1909 and 1914, four fifths of artillery pieces for the army, and their ammunition came from the Royal Ordnance Factories. However, the 18 and 13 pounder quick-firing guns were a composite design using parts produced by Armstrong, Vickers, and the Royal Ordnance Factories. Vickers and Armstrong both pleaded that they and the Woolwich Arsenal should monopolise production in order to recover development costs, but the War Office insisted that the Coventry Ordnance Works would take a share of the orders.2 Woolwich could not provide enough breech-loading guns, and therefore the Admiralty drew in new armour-plate and ordnance manufacturers.

Despite the close co-operation between Vickers and Armstrong the younger firm began to dominate. Their marine hardware was preferred by Brazil, Turkey, Spain, Russia, China, and Japan, who together made up the world’s major importers of arms.1 Coventry Ordnance Works were not considered as serious competition prior to 1914, while Armstrong’s recent record of product innovation had been poor, they offered virtually no new weapons to compete with Vickers.2 In the 1920s during the post-war slump for the armaments industry, a weakened Armstrong would be rescued through a merger with Vickers, financed by the government.